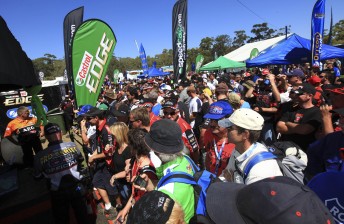 Racefans attending the Sydney Telstra 500 have the opportunity to enter the draw to win a Hyper Stimulator racing car simulator thanks to the eXcellerator Zone, presented by Castrol EDGE and Orrcon Steel

The competition will run into next season, with entries able to be lodged at the eXcellerator Zones at the Clipsal 500 in March, the Trading Post Challenge in Perth and the Sucrogen Townsville 400 – with a winner to be drawn after that event.

The Hyper Stimulator isn’t the only prize up for grabs in the Zone at the Sydney Telstra 500, race fans could also win Pit Walks, pit tours of the Ford Performance Racing garage, Showtime FMX experiences, merchandise discounts at the Blue Oval Store, free rides in the Australis full motion simulator and plenty of other giveaways over the weekend.

The Zone will also have interactive exhibits to keep fans of all ages occupied between down times in the on-track action. 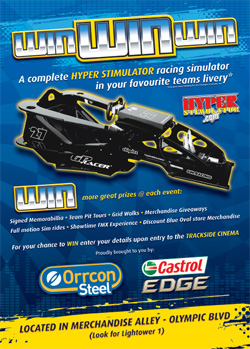 Check out the race themed movie theatre showing old and new footage from Chevron Publishing of various motorsport events from around the world,

You can race the clock on the Hyper Stimulators and attempt to beat the time established by Ford Performance Racing drivers, Mark Winterbottom and Will Davison around the Homebush circuit

Or just hang out around the various car and bike displays.

The eXcellerator Zone will be located on the inside of the Sydney Telstra 500 circuit in the Olympic Blvd merchandise precinct right next to the Bigpond bridge and is another great off-track addition to the V8 Supercar Series Grand Finale.