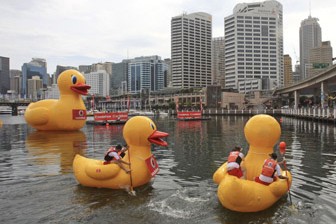 Jamie Whincup and Craig Lowndes are the only drivers with a chance of winning this year’s V8 Supercars Championship, and they got their Sydney weekend off to a great start by winning the You vs TeamVodafone’s Giant Rubber Duck Race in Darling Harbour.

The Giant Rubber Duck Race is the final challenge as part of the You vs TeamVodafone competitions, which has seen Lowndes and Whincup compete against fans in tanks, lawnmowers, beach balls, giant penguin suits and, today, giant rubber ducks!

In three metre tall rubber duckies around a 200 metre obstacle course across the famous Darling Harbour, Lowndes and Whincupo defeated Sydney friends Benjamin Sutherland and Bradley Hyde in the challenge.

Sutherland did not go away empty handed, though. As part of winning the competition, he scored the grand prize of a brand-new Holden Commodore Equipe, Nokia N9 and two three-day VIP passes to the Sydney Telstra 500. Craig Lowndes proved at Sandown last week that he was fast in wet conditions ...

Sutherland said that winning the car, phone and weekend passes was just icing on the cake.

“We were so stoked to get the chance to meet Lowndsey and Whincup,” he said.

“The car and the phone was just an amazing top off to an already unreal experience.

“We may not have won the race but just being able to do something so fun and memorable with TeamVodafone – the Championship leaders – is enough for us. This is an experience money just can’t buy.”

This weekend is a huge occasion for TeamVodafone. Whincup could potentially become the second driver in history behind Norm Beechey to win the Australian Touring Car Championship/V8 Supercars Championship in both a Ford and a Holden.

And regardless of his finishing position this weekend, it will be his fifth year that he has finished in the top two of the championship.

On the other side of the TeamVodafone garage, Lowndes is preparing to secure a seventh straight year finishing in the top four.

Lowndes has to win Saturday’s race and his car #88 teammate Whincup would have to finish worse than fourth position, for him to stay in contention for the title.

See below for more pictures of the giant ducks in action