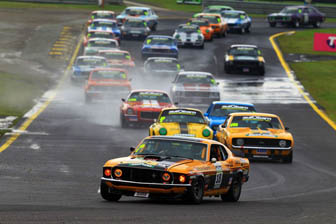 John Bowe, in a familiar position, at the front of the field

John Bowe has won every major prize in Australian motorsport – from the touring car championship to the Bathurst 1000 and the Australian Driver’s Championship.

This weekend at the Sydney Telstra 500, Bowe is in the box seat to win the Touring Car Masters Series. While it might not rank as highly as an Australian Touring Car crown, its growing stature in the local scene makes it a prize worth fighting for.

Speedcafe.com’s Grant Rowley spoke to ‘JB’ about his preparations for the Touring Car Masters finale, his future behind the wheel of racing cars and the his take on V8 Supercars super star Jamie Whincup.

SPEEDCAFE: You’ve got a handy buffer in the championship heading into the final Touring Car Masters event in Sydney this weekend. What would it mean to win it? 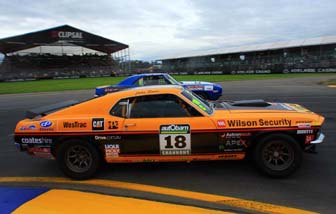 Bowe at the Clipsal 500 earlier this year

JOHN BOWE: I’m leading the championship, but I try not to get too involved with it, too be honest. I race in the Touring Car Masters, purely for enjoyment. While I don’t always agree with the way the parity adjustments are made where they take revs off you and all that stuff, I still like the cars and I like the people involved, so that’s why I do it.

I can’t say I’m not interested in the championship, because I am, but it’s not the be all and end all of my life. I would prefer it to not be a championship. I would prefer us to have just stand-alone races. That category echos the 60s and 70s, and they were much more laid back days.

Of course, when you get people supporting, sponsoring and working on your car, like I do, they all want to win the championship, so I want to win it for them as much as for myself. 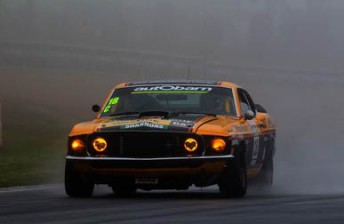 The Mustang through the spray at Mount Panorama

SPEEDCAFE: You’ve won the most races in the category this year. How would you sum up your season?

BOWE: I’ve had a good year. The car is good. It’s prepared really well by Dick Savvy. The sponsors I have are very good – most of which I’ve had involved with me for years. I quite honestly believe that I’m blessed. I love motor racing and they allow me to go motor racing.

I feel quite grateful for being able to do it. Jim (Richards) and Andrew(Miedecke) are both pretty close (in the championship), and they are very strong competitors, but hopefully I can win the championship and then everyone can stop asking me about it!

SPEEDCAFE: And you’ll be back for next year in the class?

BOWE: I have quite a strong interest in Australian GT and I like Carrera Cup – it’s very transparent – but in all honesty, Touring Car Masters really suits me. This class has a huge following amongst the public. I don’t know if anyone has really properly surveyed it, but the interest is incredible.

For me, the category isn’t about the championship, it’s about guys like me getting out there and racing them hard. There is such a great range of cars, and there’s more coming. There’s more Torana SLR 5000s coming, there’s a Mustang or two out there. It was an era of cars that was quite exciting, and that’s what makes it popular. For my time of my racing life, as much as I’d love to be racing in the V8 Supercars, I still accept the fact that my speedo has clicked over.

BOWE: I think that is going to happen. I would love to see some of the other guys who are now not racing come in. I think it is a really good alternative. When some people want to retire, they simply want to stop racing full stop. When I stopped racing V8 Supercars, I accepted the fact that every sporting person has a time, and I had my time and I was very grateful for it. That didn’t mean I didn’t want to stop racing.

V8 Supercars, at Main Series level, is very elite. You are not going to be able to do that forever. I see this Touring Car Masters as a bit like the seniors circuit in golf. I’d love to see (Mark) Skaifey come have a drive every now and then.

SPEEDCAFE: You mention Carrera Cup. Would you consider a driving in that class, even just a one-off?

BOWE: I could have driven the Bid4Jase at Townsville. Jason (Richards) and I are very close, and we have a large involvement with him and his family’s life. I could have driven it there, and he wanted me to drive it, but I wouldn’t have done it without doing some testing and understanding the thing. While I’m not a full-time racer anymore, I do like to do a good job.

One off? I might, I might not. I’ve done 15 race meetings this year – all of the TCM rounds, I’ve done some production car races in a BMW 335, and I did the Bathurst 12 Hour with Peter Edwards and Maranello Motorsport which I’m going to do again next year. And I’ve raced Trevor Simpson’s beautiful little Brabham BT23 which was built in 1967.

I’ve done plenty of races this year … and I don’t want to sound dismissive, but I’m not too worried about it. If I can get my Touring Car Masters plans in place, I’ll do that. I’m happy to continue that and do the odd race where I can.

SPEEDCAFE: OK, how about this – Would you consider one last V8 Supercars endurance drive?

BOWE: Well, I’ve been asked by various people. In my mind, I’m still only 25, it’s difficult not to be interested in it, but I would need to do a fair bit of work to do it. I’m not unfit, but I’m not athlete fit. You need to be athlete fit for it.

I’d definitely want to do some miles. I drove Tony D’Alberto’s cars this year at Eastern Creek in a ride day when he was on his honeymoon, and I thought “how good is this.”

The cars are certainly nicer to drive then when I stopped. They were very behaved. The engineering refinement of them is amazing, but finding the last two or three tenths of a second is the difficult bit.

I wouldn’t say that I wouldn’t do it, but I’d say it is probably unlikely. I would only do if I thought I could do the right job, because I still have professional pride. 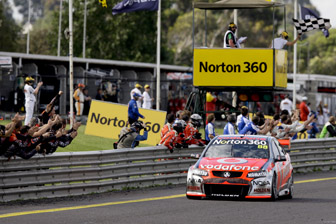 SPEEDCAFE: Jamie Whincup is very close to winning V8 title number three this weekend. The whole Triple Eight/Whincup package has been the benchmark of the past four or five years. What’s their advantage? Why do they have the edge?

I’ve known Jamie for a long time. When he didn’t have a job, we used to give him work at John Bowe Driving as an instructor. I have a lot of time for him, and I think he is an incredibly gifted driver.

Last year, I wouldn’t say he was robbed, because someone has to win a championship and James Courney deserved it, but Jamie looked like a champion for most of the year. He didn’t win it, and that’s part of life, but if he wins this weekend, it will be justice.

But it’s not just Jamie. I’d like to see some statistics since Triple Eight came into the series and see how many races they’ve won. If I was them, I’d be shouting much louder than they do. They are are an amazing operation and some of the other teams should be ashamed of themselves.

SPEEDCAFE: Jamie’s driving deal with Triple Eight concludes at the end of next year. What’s your career advice for him? Re-sign with the team and go for more wins and championships, or bite the bullet and head overseas?

There’s a bigger world out there, and Marcos Ambrose has proven you can do it. I know he would have liked to have better results consistently, but he is there. I happen to know how much money he earns, and I tell you, he’ll never earn that in Australia!

It’s Jamie’s life and his decision. He hasn’t won this third title yet, but his performance this year are pretty amazing, and he is an outstanding champion.