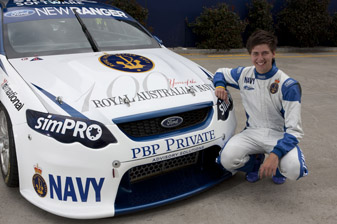 Ford Performance Racing and the Royal Australian Navy have joined forces for this weekend’s Sydney Telstra 500.

FPR’s Fujitsu V8 Supercars Series driver Chaz Mostert will carry support from the Royal Australian Navy on the bonnet and front guards of his Ford Falcon.

Currently the leading rookie in the Fujitsu Series, Mostert will run the number 100 this weekend to acknowledge the Navy’s centenary. His car will be entered under the name ‘Team Navy.’

The deal between FPR and the and the Royal Australian Navy will see them support the next generation of V8 Supercars drivers and Naval engineers through two new initiatives.

FPR has secured a five-year agreement with the Navy for a unique outplacement scheme which will see two Marine Technical sailors work with the factory Ford outfit for the next five seasons, beginning in 2012. The scheme was offered to the Navy by FPR and will be used to develop the technical skills of its mechanics.

The deal was announced today at HMAS Waterhen in Sydney.

FPR team principal Tim Edwards says that the initiative is mutually beneficial to both camps.

“It is a real honour for everyone at FPR to work so closely with the Navy on two great initiatives which will help us develop the next generation of leaders,” Edwards said.

“Firstly, I am glad we can play a part in celebrating the Royal Australian Navy’s centenary this weekend with a special livery, race suit and number on Chaz’s race car.

“In the short time we have worked with him he has displayed all the traits we look for in a young race driver – bravery, maturity and a strong work ethic, things I am sure the Navy looks for when recruiting new members.

“Secondly, I am proud the Navy has accepted our offer to place two of its mechanics within our team each year for the next five years. Not only will they provide valuable assistance as we transition to Car of the Future, but I am sure our team will learn valuable skills from them as well.”

Mostert’s Team Navy entry and the outplacement scheme were both announced by Rear Admiral Michael Uzzell who says everyone involved will benefit from the shared experiences.

“In a year in which we are celebrating the 100th anniversary of the granting of the title Royal Australian Navy, we are very pleased to be in partnership with FPR,” RADM Uzzell said.

“Behind any successful V8 race car is a highly focussed and close knit team capable of working under pressure with high technology equipment to win in demanding environments.

“There are direct parallels between the work of a V8 Supercars team and the expectations we have of our Marine Technical sailors in meeting Navy’s mission of being able to fight and win at sea.“

Team Navy will compete in the two 17-lap Development Series races at this weekend’s Sydney Telstra 500 on the Sydney Olympic Park Street Circuit.