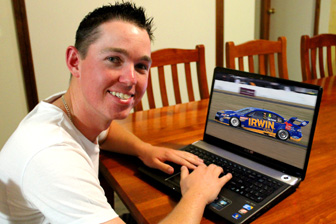 The winning entry of IRWIN Racing’s 2012 livery has been selected and will be unveiled this Sunday at the Sydney Telstra 500.

IRWIN Tools has selected its winning entry in the ‘Create Something Great – Design the IRWIN V8’ competition, and ironically, the winner is a Bathurst, NSW native.

Sam Dwyer, an apprentice sign writer, submitted his design and after consideration, the judges from IRWIN Tools and Stone Brothers Racing agreed that it was the best.

The IRWIN Ford Falcon will be wrapped over the course of the weekend live in the V8 Supercars paddock, with the final design being revealed at 12.45pm, just prior to the final race of the season.

The car will be first seen on the race track at the Clipsal 500 in the hands of new team recruit Lee Holdsworth. 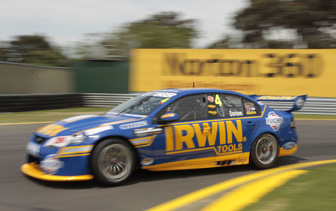 Dwyer, who dreams of working in V8 Supercars, was thrilled to win the competition.

“I can’t believe it, I am lost for words, designing a V8 Supercar and seeing it on the grid is like a dream come true,” said Dwyer.

“I’ve been drawing cars since I was little so to be told that my design would be on the IRWIN Racing Ford is a pretty good feeling.

“I’m looking forward to seeing it – I can’t wait to see my design in the flesh. I can’t believe that my car design will be on the grid at the Clipsal 500 next year.”

Coming from Bathurst, Dwyer has been a fan of V8 Supercars for as long as he can remember. Having done graphic design at school, his dream is to become a full-time designer for one of the V8 teams.

“I did a bit of graphic design in school and always wanted to be a sign writer,” said Dwyer.

“Winning this competition gives me a start. I will definitely be putting my design into my portfolio and on the resume.

“I’m an apprentice at the moment, but I’ve always wanted to do sign writing for a V8 Supercar team.

“I spent some time at DJR (Dick Johnson Racing) watching their graphic designer to get an idea as to what they do.

“I sort of see winning this competition as a step towards a full-time career in V8 Supercars design – that’s where I want to go.”

Dwyer approached the IRWIN Racing design considering the look and feel of the IRWIN Tools logo, and the designs of the past.

“I pretty much thought of the colours that I had to use, came up with some concepts, started off with some shapes and then added the logos from the car,” said Dwyer.

IRWIN Tools was impressed by the designs that Dwyer submitted and was thrilled to learn that he is involved in a trade.

“Sam (Dwyer) was one of the few people that submitted several designs, each of which was unique and different,” said Laura Turnbull, IRWIN Tools’ Marketing Director.

“It was a tough, but three of his designs made the final list really making Sam stand out from the rest. His artwork designs were excellent.

“For IRWIN Tools, which offers products to a wide range of industries and trades, it was also pretty exciting to hear that Sam is an apprentice sign writer who has an interest in not just V8 Supercars as a fan, but is keen to work within the industry.”

An IRWIN Racing car will be wrapped from Friday in the V8 Supercars paddock, next to the Stone Brothers Racing transporter, at the Sydney Telstra 500.

The livery will be revealed in full and Sam Dwyer’s signature added to the car at 12.45pm on Sunday.