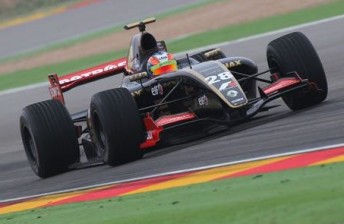 Stanaway aboard the Gravity-Charouz entry

The 2011 German Formula 3 Champion set the quickest times in both the morning and afternoon sessions, driving for the Gravity-Charouz Racing team.

The field of 24 drivers is made up of the top runners from the globe’s various Formula 3 and Formula Renault 2.0 classes, in addition to 2011 GP3 Champion Valtteri Bottas.

The day started in damp conditions, with Stanaway lapping the track in a best time of 1m43.594s as the track gradually dried.

In the dry afternoon session, he then improved by 0.4s to be over a tenth of a second faster than Formula Renault Eurocup driver Danil Kvyat (P1 Motorsport).

British Formula 3 runner-up Kevin Magnussen, who will race for Carlin in the 2012 Formula Renault 3.5 Series, elected to skip the test after suffering minor head injuries in a frightening crash at the recent Macau Grand Prix.

Stanaway is in for a busy week, with a two-day GP3 test with Maruissia Manor Racing in Jerez set to follow immediately after the completion of the three-day Formula Renault 3.5 outing.

The former Australian Formula Ford Championship competitor shot to prominence on the European racing seen at this year’s Belgian Grand Prix, where he won on debut in the highly-competitive GP3 class.