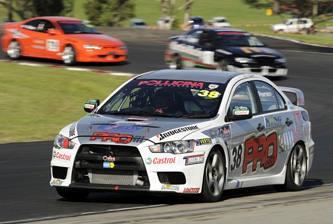 The Eastern Creek Six Hour will run on December 11

The Australian Racing Driver’s Club has confirmed that a production car endurance race will be held for the second-consecutive at the western Sydney circuit.

This year’s race, to be run on December 11, has been shortened from eight to six hours.

Lack of entries almost curtailed the event, but a late number turn around will see 23-cars line-up.

When official entries closed on Friday afternoon only five paid entries had been received, leaving the event in danger of being cancelled.

According to Australian Manufacturers Championship category manager Aaron McGill, at least 10 of the 23 car field will be in contention for the outright victory.

“When I got home on Friday night there were seven more entries on my fax machine, and they just kept coming across the weekend,” said McGill.

McGill and ARDC CEO Glenn Matthews worked hard over the weekend to ensure the event would run and Matthews is excited about the strength of the field.

“In motorsport there can be unfortunate commercial realities when running race meetings, and five entries is clearly not enough to make it viable,” Matthews said.

“However, we worked hard with the Australian Manufacturers Championship to ensure that we have a quality field and the race can run as planned.

“It’s in no one’s interest to see races being cancelled. We’re very excited about the race, especially with the quality of entrants.”

Among the favourites for the race include Stuart Kostera/Inky Tulloch in a Mitsubishi Evo. Other Evos in contention will be Tony Quinn/Klark Quinn, Des Wall/David Wall and Greg Symes/Glenn Seton.

Other entries to look out for include the Subaru WRX of Cam Wilson/Peter Burnitt/David Wood and the two BMW 135is of Barry Morcom/Nathan Morcom/Chaz Mostert and Grant Sherrin/Iain Sherrin.