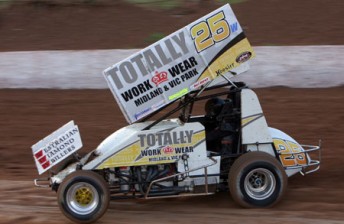 James McFadden on his way to winning WSS Round 1

The event was postponed from Saturday night to Sunday evening after the seemingly annual World Series opening night downpour.

McFadden was racing wheel to wheel with Jason Johnson when the lapped car of David Murcott caused a bottleneck – the American coming unstuck and rolling.

This set up a clear path for McFadden to take the win over East Coast Pipelines racer and defending Champion, Robbie Farr. Third placed was young local David Muir in arguably the best finish of his flourishing career – displacing veterans Max Dumesny and Trevor Green in the process.

Brooke Tatnell had a poor start to his campaign, rolling early in the night and unable to advance past the B – the Krikke Motorsport clan will be putting together a new car ahead of Dubbo’s second round next weekend.