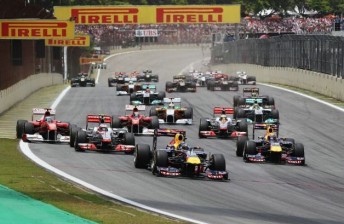 Mark Webber has taken his first Grand Prix victory of 2011 in the season’s final race in Brazil.

The 35-year-old Australian beat home early leader and team-mate Sebastian Vettel, who suffered with gearbox issues throughout the majority of the 71 laps.

The result sees Webber overcome Alonso for third in the points standings, behind Button and runaway champion Vettel.

Vettel enjoyed another brilliant start from pole position to lead Webber and Button during the opening laps, while Alonso made it around the outside of Lewis Hamilton to take fourth from the Briton at Turn 1.

With Vettel being told to short-shift in second and third gears from Lap 14 onwards, Webber kept the gap to his team-mate below three seconds during the first stint, before sailing comfortably into the race lead at Turn 1 on Lap 29.

Now short-shifting in every gear, Vettel set about maintaining the 7.0s advantage that the two Red Bull drivers had built over Alonso, who had earlier made his way past Button for third on Lap 11.

Button kicked off the second round of stops on Lap 32 by moving to the prime tyres, while team-mate Hamilton was in just two laps later and opted for more of the softer rubber.

The two McLaren’s would be disadvantaged early in their third stints by Felipe Massa, who was caught by both Button and Hamilton having opted for a long second stint after running a distant sixth in the early stages.

After Button found a way around the Ferrari, Hamilton lost in excess of six seconds to his team-mate over the following five laps, before making an early final stop in order to leap-frog the Ferrari.

Covering the move, Ferrari pitted Massa and returned the Brazilian to the track in-front of Hamilton, before the battle ended with the McLaren’s gearbox in pieces on Lap 47.

The remaining four contenders took their final stops for the prime tyres with less than 20 laps to go, after which point Button set about catching Alonso – the Ferrari clearly struggling for pace on the harder rubber.

On Lap 63 Button made a DRS-assisted move on the two-time World Champion into Turn 3, but by that point Vettel was over 11s ahead and the podium places were set.

Webber pushed hard to the very end, resetting the fastest lap at will – recording the final benchmark on the very last lap to chalk up a 16.9s win over his team-mate, with Button a further 10.7s adrift in third. Alonso and Massa were the only other two to finish on the lead lap.

It was a difficult day for Massa’s fellow Brazilians Rubens Barrichello and Bruno Senna, with the Williams driver only able to recover to 14th after falling from 12th to 21st on the opening lap.

Senna meanwhile was 17th after receiving a drive-through penalty for a collision with Michael Schumacher on Lap 10.

Schumacher had been attempting to overtake Senna around the outside when the pair twice made contact – the second touch enough to damage the Renault’s front-wing and puncture the left-rear tyre of the Mercedes. Schumacher would finish 15th.

See below for the final Drivers’ Championship standings

See below for the final Constructors’ Championship standings