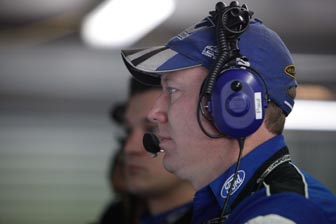 Successful V8 Supercars engineer Paul Forgie will make a return to V8 Supercars at the Sydney Telstra 500 this weekend.

Team owner Kevin Murphy is enthusiastic about securing Forgie’s services for this weekend.

“Paul Forgie will be working alongside Peter Smith, David Slater and Dean Lillie in the race engineering group,” Murphy said.

“Paul will be working to get to know the team this weekend, with the possibility of a future role with Greg Murphy Racing in 2012.

“Paul was quite keen to come and join us and work outside the main game, so the Fujitsu Series suits his plan pretty well. His experience will be a tremendous asset for the team, and a great benefit to any young driver who we would be bringing through in the future, so we’re going to build a relationship with him and see how it all goes.”

Besides Forgie’s success with Ambrose, he was recently the engineer for Stone Brothers Racing driver Shane van Gisbergen, guiding him to two wins this year before he departed the team in August.

Cassidy made his V8 Supercars debut at Sandown last week, finishing 20th, 13th and 10th in the three races.