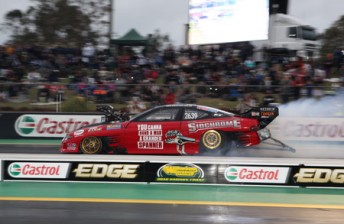 The three leading Championship drag racing facilities in Australia – Willowbank Raceway, Sydney Dragway and the Perth Motorplex have banded together and are looking to introduce a raft of changes to ‘modernise’ the sport.

Central to the joint announcement made by the tracks was the introduction of a $50 million public liability insurance package that all three can operate events under.

The tracks are looking to introduce events for high-powered road-going cars and motorcycles that can perform runs at 10 second durations and stepping away from the Australian National Drag Racing Association’s (ANDRA) umbrella for minor events.

“Every week we have been turning away amateur racers in some of the best engineered road cars and bikes, because the existing rules are completely antiquated and do not reflect or acknowledge the huge steps forward manufacturers have made in engineering, nor the safety standards of our facilities,” said Willowbank Raceway Managing Director, Steve Bettes.

“For example, a top-of-the-line HSV GTS Commodore, Subaru WRX or turbo six cylinder Falcon with just a few minor tweaks in technology is capable of running well into the mid to low 11 second zone and it doesn’t take too much more to get them into the 10 second zone. A completely standard, new high-powered motorcycle will run 10 second times off the showroom floor.”

The move sets for an interesting time for ANDRA – which has been struggling for much of 2011 with board upheaval and growing competitor discontent over the way in which professional level drag racing is run in Australia.

ANDRA is believed to be in the process of finalising a revised calendar that will see events at different venues, including the three current Championship venues.