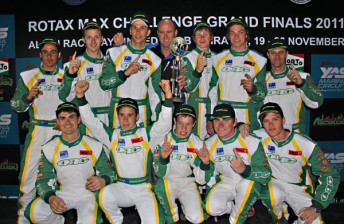 The Australian team celebrating their victory in the Nations Cup in the Rotax Max Challenge Grand Final.

Australia’s team of kart racers has taken out the Nations Cup in the 2011 Rotax Max Challenge Grand Final at the Al Ain Raceway in the United Arab Emirates.

Led by a trio of runner-up placings by Fujitsu Cool-backed driver Joseph Mawson, Dave Sera and Jason Pringle, the 11-driver team claimed karting’s highest honour as a team in the event.

Second place in the Nations Cup went to Canada, who had 21 drivers present in Al Ain – an event record, with South Africa finishing third.

Mawson’s second place behind Japan’s Ukyo Sasahara, who previously won the event in 2009, was the second successive year that a young Australian has finished on the podium in the Junior Max category.

Pierce Lehane, who finished third last year, was running fourth during the early stages of the 18-lap World Final before being involved in an incident and crossing the line 15th. Australia’s other representative in the Junior Max category, Michael Stewart, finished 24th. 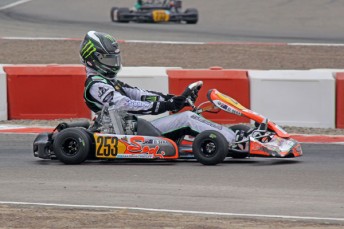 Sera entered the weekend as one of the favourites for the Senior Max category – and he lived up to all expectations.

The Monster Energy-backed driver started from the outside front row for the final alongside 2008 winner Ben Cooper. While Sera diced with fellow Aussie Tyler Greenbury and England’s Sean Babington it allowed Cooper to opening a commanding lead.

Despite his best efforts, which saw him bridge the gap in the closing stages, Sera was unable to reel in Cooper to cross the line second.

“I’ve had some bad luck in the past, to get on the podium is a great result. It obviously would have been nice to win but to be second is very pleasing.

“I’d like to win at least one world title before I retire from karts, hopefully this can be next year.”

After being involved in several incidents, Greenbury crossed the line 19th but was later excluded for one of the incidents. Victorian Josh de Maio was impressive on his way to sixth place, after starting 30th in the pre-final.

Pringle battled with 2007 Champion Pier-Luc Oullette and his fellow Canadian Nicholas Latifi in the DD2 final. Despite leading the way on several occasions, Pringle was unable to stop Oullette from taking his second title. 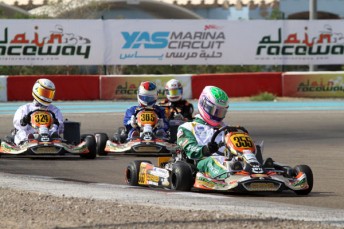 Jason Pringle on his way to second place in the DD2 category. Pic: BRP-Powertrain

Damian Ward showed some great speed to charge his way from 16th on the grid at the start of the pre-final to eventually be classified in fourth place. Queenslander Brendan Nelson finished 17th.

Brent Coghlan came within half a kart-length of the podium when he crossed the line fifth in the DD2 Masters category.

Unfortunately for James Macken, bad luck haunted him throughout the week with his event ending after he crashed out of the Senior Max category in the Last Chance Qualifier on Friday.