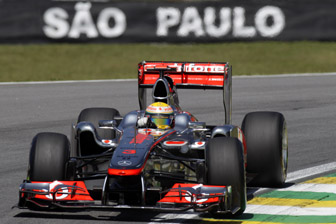 Lewis Hamilton’s has topped time sheets at the Interlagos circuit ahead of this weekend’s Brazilian Grand Prix.

The McLaren star set the fastest time of the day in the second free practice session, but it was a close-run thing as the top eight drivers – from McLaren, Red Bull, Ferrari and Mercedes – were separated by just 0.480s.

Hamilton lapped his McLaren in 1m 13.392s, 0.167s ahead of the Red Bull Racing pair of Sebastian Vettel and Mark Webber.

After engine failure in the first practice, Fernando Alonso’s Ferrari was fourth quickest, while Mercedes’ Michael Schumacher pushed up to fifth, which was the fastest time for a while.

Felipe Massa, celebrating his 100th start for Ferrari this weekend, was sixth from McLaren’s Jenson Button and Nico Rosberg.

The first session saw Australia’s Mark Webber top the time-sheets. Webber, who won the 2009 Brazilian Grand Prix, set the early pace for Red Bull with 1m13.811s, but he was only 0.014s ahead of Jenson Button, and 0.150s ahead of Lewis Hamilton.

In the first session, there were five substitutions on track, with Jean-Eric Vergne at Toro Rosso, replacing Sebastien Buemi, Romain Grosjean stood in at Renault for Vitaly Petrov; Nico Hulkenberg was out in place of Adrian Sutil at Force India, Luiz Razia took Jarno Trulli’s seat at Lotus, and Czech Jan Charouz took over Tonio Liuzzi’s HRT.