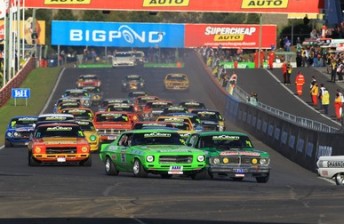 The Touring Car Masters class at Bathurst this year

The popular Touring Car Masters Series has confirmed its 2012 calendar.

As reported by Speedcafe.com earlier this month, the Autobarn-supported category will make its debut on the Shannons Nationals presented by Hi-Tec Oils support card next season, racing with the series at Phillip Island in May and the final round at Sandown in November.

The category, heading into its sixth season, will compete at three of V8 Supercars biggest race meetings, including the season-opening Clipsal 500, the Sandown 500 and the Bathurst 1000.

While the category will see a diverse range of race meetings, the centre piece of the class remains on Father’s Day in September where the Touring Car Masters is the lead category at the Muscle Car Masters at Eastern Creek.

The 2011 Touring Car Masters will go down to the wire next weekend in Sydney between Australian touring car stalwarts John Bowe and Jim Richards. Bowe triumphed at Sandown last weekend, despite rev restrictions. He sits 50 points ahead of Richards with three races at the Homebush street track remaining.

See below for the 2012 Autobarn Touring Car Masters calendar