Mika Salo is one of Finland’s most popular and most successful drivers. Yes, his countrymen, Keke Rosberg, Mika Häkkinen and more recently Kimi Räikkönen have each won the Formula One World championship, but Salo competed in over 100 Grands Prix, with Lotus, Tyrrell, Sauber, Arrows, Toyota, BAR-Honda and Ferrari, and has an enviable Sport scar record.

Salo started his Formula One career in late 1994, getting the call up to drive in the last two rounds of the series in Japan and Australia. His Formula One career got its kick-start after he spent several years in Japan racing. He started racing go-karts and progressed to race in the British Formula 3 championship before finishing runner up to Häkkinen in the Formula 3 championship.

An interest in racing was nurtured by Salo’s father, who liked racing and worked next to a go-kart track.

“When it all started I was four years,” Mika Salo told Speedcafe.com.

“I lived near a race circuit in Finland. My father was a bit interested and he took me to the circuit that was near his workplace.

“There were some rental cars and I got to try one. I can’t remember what happened but I liked it.

“By five I was already racing so he bought me a used, old go-kart. I started racing straight away in some club championship races.

“I was younger than anyone else because there were no other five year olds to race against, but I kept winning all the time. I guess I was good at it.”

In his early years of racing Salo was not considering Formula One as part of a career path.

“Keke (Rosberg) was involved in Formula One when I was very young, but we didn’t get it on TV so I wasn’t thinking about it being a job some day,” said Salo.

“In-fact, it wasn’t until I moved to Japan, which was the first time I got paid to drive, that I considered racing as a job.”

The story goes that Salo was caught drink driving which prevented him from getting the required license to race in series’ like Formula One, so he relocated to Japan to race there.

It was while he was racing in the Japanese Formula 3000 series that he got a call giving him the opportunity to make his Formula One debut.

“It was the middle of the season in Japan, one evening I was in bed and Peter Collins called and said that they needed a driver for Suzuka and could I do it and I said ‘sure no problems’,” said Salo.

“There was only one downside, Lotus weren’t doing very well, there would be no testing and they needed $100,000.”

Unable to sleep that night, after the excitement of that phone call, Salo hit the phones to try and raise the money needed to go racing.

“I could do it, but didn’t want to put all of my money into it,” said Salo.

“I walked into Lotus the next day with a Mickey Mouse back pack full of 10,000yen bills and said ‘there you go I’m driving’.”

Mika Salo was a Formula One star for eight seasons

Salo did a good job in his first race, finishing just outside the points.

“I did quite well, I finished tenth,” said Salo.

“Lotus asked if I could go to Adelaide for the last round but it was clashing with my Japanese F3000 race.

“I had to ask them if I could have a weekend off and they said sure, as long as I came back for the last round, which was not a problem.”

Salo raced for eight years between 1995 and 2002 starting in 111 Grands Prix, he loved what he did but admitted that life wasn’t as glamorous as it looked.

“It was a tough job, there is no private life and everything has something to do with racing,” said Salo.

“I could not get sick because there are no sick days in Formula One, it was quite a hard lifestyle, but I still enjoyed every moment of it.”

One of Salo’s biggest career moments was when he got to drive for the Prancing Horse.

“Of course driving for Ferrari in Formula One was cool,” said Salo.

Mika Salo drove at Ferrari in 1999

“All the drivers, even if they don’t admit it, want to drive for Ferrari.

“I got to do that and was pretty happy with that.”

At the end of 2002 Salo was left without a drive and promptly retired from F1 racing. He quickly embarked on furthering his career in Sports cars. His biggest year was in 2009 when he won the big three; the Le Mans 24-Hour race (GT2 class), the Sebring 12 Hour and Petit Le Mans.

“It was a good year, we won the three biggest events of the season, it was a very good year,” said Salo.

“I won at Le Mans twice, we could have won it more but we had some brain failure.

“Sports cars have been really good. I’ve done a lot with Ferrari which all goes back to 1999 when I drove for them in Formula One.

“I developed a good relationship with them and was able to continue to drive for them.”

Standing on the podium at Le Mans is not only special, but an unforgettable feeling for any driver.

“You don’t really realise how big the win is because you are so tired,” said Salo.

“You are standing on the podium and there are over 200,000 people in front of you, you feel like you are on a different planet.

“It’s a big thing, it’s important for the team and the driver and it’s particularly important to the manufacturer. Winning it is unreal.”

“It was fun, but CART died after that year and it wasn’t what I was looking to do,” said Salo.

“The only disappointment with my time in CART was that I never got to do any oval racing.

“I always wanted to do at least one oval race to see what people are talking about.

“I’d just raced on the Gold Coast and the next race was at Fontana, which is obviously an Oval circuit.

“Unfortunately it was cancelled because of the bushfires in California, so I went home.”

When CART folded and IndyCars were formed Salo decided that it was not something that he was interested in.

“The racing was fun and I loved the street circuits,” said Salo.

“But I’m not sure about IndyCars, they are dangerous, which is what you saw at Las Vegas (Dan Wheldon’s death).

“I’m too old to take that sort of risk.”

Having driven for so long, in so many high profile championships, Salo finds it difficult to pin point a career highlight, but eventually comes back to Formula One.

“Every different category has its good things, you can’t compare them,” said Salo.

“Of course Formula One is something that most drivers want to experience and I will never forget those days.

“It’s hard work, but it pays off well. You learn so much and the drivers are the best in the world.” 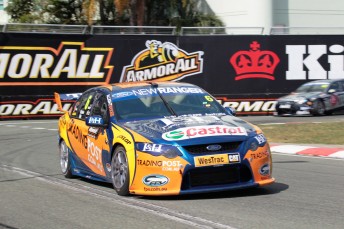 Over the last two years, Salo has been invited to race in the international race on the streets of Surfers paradise. He’s enjoyed his time at the ArmorAll Gold Coast 600, particularly this year.

“I was here last year in a not so good car and that was a painful experience,” said Salo.

“In a good car it was a lot of fun particularly with Will Davison as my team mate.

“He helped me last year on how to drive the car and we continued on our way this year and he was a great help.

“I was fortunate to drive with Will; he’s one of the best, if not the best driver in V8s.

“I really enjoyed supporting him.”

Salo is technically semi-retired now, but still manages to pop up at several race meets each year.

“I pretty much spend most of my time with my kids,” said Salo.

“I’m sort of cutting down on my racing; I just do selected races now days.

“I try to stay home with my two young children.

“I still love racing but I don’t want to do a full championship where you are away for 11 months of the year. It drains you out and I’m too old for that now.

“I try to do six or seven races a year; it gives me a point for living.”

With the Gold Coast race long finished, Salo still has plans to race again next year. What race will be first he is still unsure of?

“They have a plan to get together all the ex-Formula One drivers and some others to do a championship race in India,” said Salo.

“If it happens I’ll do it, if they don’t, then my next race will probably be next year’s Sebring 12-Hour.”

Interview with Mika Salo before driving a Chevrolet Camaro