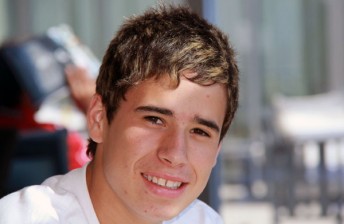 Joesph Mawson is on top in the Junior Max rankings at the Rotax Max Challenge Grand Finals.

In his first attempt at an overseas event, Joseph Mawson is proving to be genuine star by leading the Australian charge during the opening two rounds of heat races in the 2011 Rotax Max Challenge Grand Finals at the Al Ain Raceway in the UAE.

Following his two qualifying heat races, which saw him line up behind fellow Australian Pierce Lehane, Mawson recorded a victory and second place finish to be equal on points with Japanese driver Tadasuke Makino at the top of the Junior Max standings.

The Fujitsu Cool-backed driver’s victory was even further boosted with Lehane crossing the line second to make it an Aussie one-two.

“It’s been a fantastic day, in a way it felt just like home lining up behind Pierce in our heat races and then finishing one-two – although it feels a bit better on the world stage,” said Mawson.

“We’ve still got one heat race to go tomorrow, hopefully I can secure pole position with a top result in that.”

Unfortunately for the other Australian teenager competing in the Junior Max category, Michael Stewart, he endured a couple of incidents which saw him finish well down the order.

Dave Sera proved once again that he’s one of the world’s most talented kart racers by recording a pair of second places in his two 11-lap encounters.

Sera is joined near the pointy end of the field by Queenslander Tyler Greenbury, who finished seventh and third in his pair of qualifying races.

James Macken and Josh de Maio both showed glimpses of speed during today’s racing, only to be caught up in several incidents in the hard and fast racing around the 1395m Al Ain Raceway.

After qualifying 14th fastest yesterday, Victorian Jason Pringle moved towards the front in both of his heat races today to secure a fourth and second place finish in today’s two DD2 events.

Damian Ward and Brendan Nelson both mixed it near the front of the field but were also involved in early race incidents in one of their races to hamper their overall position in the standings.

Sydneysider Brent Coghlan was involved in a high-speed crash at the start of his opening heat race, he recovered to finish eighth in his second race in the DD2 Masters category.

The racing continues on Friday with the final heat race followed by the last chance repercharge races. These will be followed by a pre-final and the final on Saturday.