Roland Dane could enter his newly-acquired 1967 Chevrolet Camaro in the Touring Car Masters Series next year.

The Triple Eight Race Engineering director purchased an Andy Rouse-built Camaro from the UK earlier this year. The car has been freighted from England and has arrived in Australia, awaiting clearance from customs.

While Dane says that the car is simply for “fun,” he says that if the car eligible, he would consider entering it in the popular historic class for himself or his racing mates.

“It will only be for a bit of fun,” Dane said of racing his new machine.

“I’m not sure how legal it is for Touring Car Masters, but if it is, or if we can make it legal, then I think it would be quite fun. 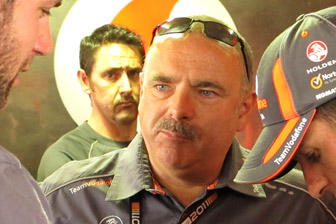 “I might ask Paul Morris or Mark Skaife to drive it, just for a bit of fun. I think they might enjoy it.”

Dane insists that when he drives the car, it will be well away from the spotlight of the TCM’s V8 Supercars events.

“When I drive it, I’ll make sure I’m up against as feeble opposition as possible, well out of the public eye!” he joked.

“I’ll probably arrange for a few dozen test days before I take it out into public!”

In the hands of ex-BTCC race winners Rouse and Pete Hall, the Camaro is one of the most successful cars of its time.

Although excited about the project, Dane says that the car will not be a priority with the walls of Triple Eight Race Engineering.

“It will take its place in the queue,” Dane said.

“We’ve got a lot going on at the moment, so we won’t be in any hurry to do anything silly with it. We won’t be wasting time with my project when we will be getting on with the main project.”

Dane’s TeamVodafone squad heads into next weekend’s Sydney Telstra 500 with the 2011 V8 Supercars Teams’ Championship already sewn up. Its drivers Jamie Whincup and Craig Lowndes meanwhile are guaranteed to finish first and second in the Drivers’ standings.

The Sydney street race kicks off at Homebush on December 2-4.