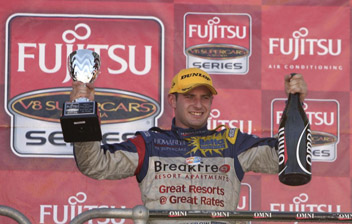 Adam Macrow will drive the Auto One Wildcard entry at the final round of the 2011 Auto One V8 Ute Racing Series – protected by Armor All at the Sydney Telstra 500 next weekend.

Macrow, winner of the 2006 Fujitsu V8 Series, is the eighth driver to step behind the wheel of the Auto One Wildcard this year, joining an exception list that includes Charlie OBrien, Marcus Marshall, Tim Blanchard, Dean Canto, David Besnard and Tony Longhurst.

Next weekend’s V8 Utes race meeting will be one of many firsts for Macrow, who has not competed in a national motor race since 2008.

“There will be a lot of firsts for me this weekend,” he said.

Macrow is trying to fit in a test day before he arrives at the track next week however his first spin in the Ute may well be in Practice 1 on Friday.

“At the end of day, I’ll just go out and learn the track and keep off the walls and whatever happens happens,” he says.

“I’m looking forward to driving the Ute and would like to thank Auto One for the great opportunity.”

The final round of the V8 Utes Series will see four drivers battle it out for the 2011 crown.

Chris Pither, Ryal Harris, David Sieders and reigning champion Grant Johnson all have a mathematical shot at the title, with Pither holding a considerable upper hand.

The top four are covered by 62 points.