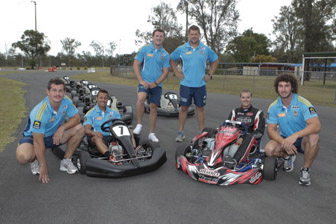 Titans stars Scott Prince and Greg Bird were joined by Jordan Rankin, Ben Ridge and Michael Henderson for the karting day, and as expected, the League stars didn’t lack confidence on the track.

However, Webb says their careers are best left on the footy field …

“I think that a few of the guys should stick to earning their bread playing football,” Webb joked.

“But they definitely have some talent – they found some nice racing lines and speed behind the wheel.

“It was great fun, they are a good bunch of guys.”

Webb used the karting event to settle some nerves before heading to the Sydney Telstra 500 this weekend – a track that has proved successful for him.

In 2009, Webb wrapped up the Fujitsu V8 Series, and last year, he won his first V8 race, driving for Dick Johnson Racing.

Now running his own team, Webb admits it has been a difficult season, but with plans for an expanded team line-up in 2012, Webb is optimistic for the future.

“My second season in the main game, and our first as a team out on our own hasn’t quite been as successful as we’d hoped,” he said.

“We’ve learnt a lot and grown stronger as a team, we’re ready to tackle whatever challenges we will face.

“For Homebush we aim to be standing on those podium steps once again.”