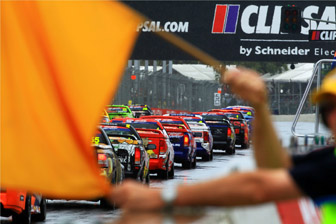 The 2012 Auto One V8 Ute Racing Series – protected by Armor All calendar has been announced.

The new season will see eight rounds, 24 races (at least 12 of which will be telecast live) along with eight post-produced TV shows.

The 12th year of the V8 Utes series will visit six states and one territory, kicking off at the Clipsal 500 in Adelaide, March 1-4 where the series will celebrate its 300th race start.

The class will visit a good mix of high-profile meetings, as well as some of Australia’s classic permanent tracks.

Category Manager Bill West of Spherix is pleased with the calendar layout.

“We are really happy with our calendar. It takes us back to a few places we haven’t been to in a while like Tasmania and Winton Raceway, where we have a fairly large fan base,” West said.

All rounds of the V8 Ute Series will again be telecast on the Seven Network, SPEED Channel, TV3 New Zealand, Motors TV Europe, Telenova Italy, Motorworld and SPEED Channel 2 in the USA.

See below the full V8 Ute racing calendar for 2012