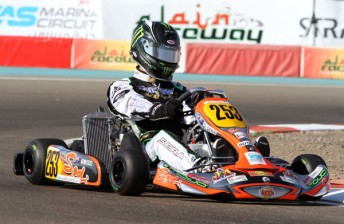 Dave Sera on his way to posting the sixth fastest time in Senior Max. Pic: BRP-Powertrain

Australia’s contingent of drivers have made a strong start to their campaigns 2011 Rotax Max Challenge Grand at the Al Ain Raceway in the United Arab Emirates.

“I qualified seventh last year and ended up third, so hopefully it is my lucky number,” said Lehane.

“Things are looking up today. I was 30th fastest in the final practice session, so to be second overall and sixth overall is a big achievement,” said Sera.

“I can now race from the second row of the grid and be competitive.  Last time I was here in 2007 I had great speed. Although we’re using a different kart and different tyres to back then, the track knowledge is very valuable.”

Tyler Greenbury was 18th fastest while Josh de Maio and James Macken were 36th and 42nd overall in the 72-kart field.

In the DD2 category, Nelson proved to be a surprise packet in only his third event aboard the two-speed machine. The Queenslander qualified seventh overall, closely followed by Damian Ward (12th) and Jason Pringle (14th).

A total of 265 drivers from 60 Nations are competing in this week’s event.