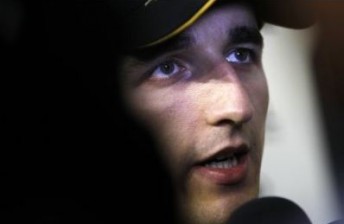 Robert Kubica will not be fit to return to the Formula One World Championship for the beginning of the 2012 season, the Pole has confirmed.

Kubica was forced to miss the entire 2011 campaign following a pre-season crash on an Italian rally that caused significant damage to his right forearm.

Kubica’s situation sees Frenchman Romain Grosjean highly likely to move back into a race driver role with the Lotus Renault GP squad next season. The Frenchman resurrected his career by winning last year’s GP2 Series crown after being dumped by Renault at the end of 2009.

While Kubica is still expected to make a full recovery, the 2008 Canadian Grand Prix winner says he wants to make sure that he’s 100% before locking in his comeback plan.

“Even if I’ve been working very, very hard over the course of the last few weeks, I came to the conclusion that I am not yet certain to be ready for the 2012 season,” said Kubica in a statement issued by Lotus Renault GP.

“I have called the team and I have informed them of the situation. This was a difficult decision to make, but it is the most reasonable one. I also know that LRGP need to prepare for next year, and further extending deadlines would not have been the right thing to do.

“On a personal level, my recovery is still very encouraging and my doctors keep being impressed. I just need more time, as I want to be 100% ready before I commit to anything driving related.”

Although Renault is keen to remain associated with Kubica, the Pole’s contract with the team officially runs out at the conclusion of this season.

It is widely speculated that Ferrari remains interested in Kubica, with the Italian team believed to have offered the 26-year-old a testing program in an old-spec car for next year ahead of a potential race drive in 2013.

Ferrari president Luca di Montezemelo told Italian press earlier this week that Felipe Massa, who has not scored a podium finish in over 12 months, must work hard to prove himself worthy of re-signing.

“With Massa we have a contract for next year. He’s had an unfortunate season but we aren’t doubting a driver who three years ago fought for the world title,” said di Montezemelo.

“Let’s hope he closes out this season with some satisfaction in Brazil. Then next year he will fight for his reconfirmation in 2013.”

See below for Speedcafe.com’s guide to this weekend’s Brazilian Grand Prix