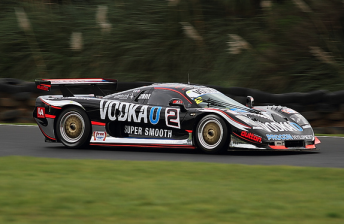 Dean Grant in the Mosler he has sold to Rod Salmon

Rod Salmon has purchased Dean Grant’s Mosler MT900 with the aim of winning his third Armor All Bathurst 12 Hour next year.

Salmon, won back-to-back 12 Hour crowns with Damien White/Graham Alexander (2008) and White/Tony Longhurst (2009) aboard Mitsubishi Lancers, will get his first taste of the British car at Phillip Island tomorrow (Friday).

More, extensive testing will be conducted in the lead-up to the 12 Hour race to ensure the car can take on the might of the Audi, Ferrari, Lamborghini and Mercedes opposition.

Salmon will be joined by White, who works as operations manager for V8 Supercars, in tomorrow’s test.

“Rod has been talking about doing the 12 Hour race again for sometime,” White told Speedcafe.com.

“We have developed a great friendship over the years. I’ve done a fair bit of racing with him at Bathurst, so when he contacted me about the Mosler, of course I was keen.

“We won the race in 08 and 09, and now with these juicier GT3 cars that are running at the front, he has ditched any plans of running an Evo.

“He had a sniff around, came to (the final Vodka O Australian GT Championship round at) Sandown to look at the Moslers, and he has since purchased the Dean Grant car.

“Alan Heaphy (Team Mitsubishi Ralliart) and Keith Rennie (Jay Motorsport) also came to Sandown and looked over the car. As is the usual case with Rod, when he does something, he doesn’t do it in halves.

Not surprisingly, White says that he would love another chance at a win at Bathurst.

“It would be nice to put the helmet back on.”

Salmon’s Mosler had a tough time of it in last year’s 12 Hour, with the car suffering a tyre failure heading into The Chase – resulting in major damage.