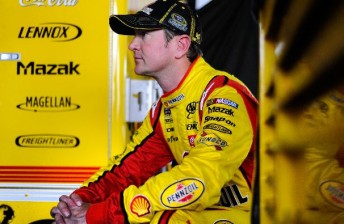 The incident occurred when Punch attempted to interview Busch following the Penske Racing driver’s retirement from the season-ending Homestead race.

The #22 Dodge had broken a gearbox in the early stages, with the resulting debris causing damage to the front of the eventual championship winning #14 Tony Stewart Chevrolet.

Busch quickly became frustrated with the need to hold the interview until a live-cross could be made, and yelled several profanities at Punch before the respected reporter decided to abandon the situation.

“Unfortunately, our result in the season-ending race at Homestead on Sunday was not what we had hoped for as a team,” said Busch in a statement.

“In my frustration with the loss of my transmission early in the race, I let my emotions get the better of me.

“I regret having done this and apologize to the sponsors of Penske Racing , to NASCAR, its fans, to the media and in particular, Dr. Jerry Punch.”

Penske Racing has also issued its own statement, revealing that the incident is now the subject of an internal investigation.

“Penske Racing extends its apologies to Dr. Jerry Punch, our media partners and our sponsors and fans for Kurt Busch’s inappropriate actions in Homestead on Sunday,” the Penske statement read.

“These actions do not represent Penske Racing and are inconsistent with the company’s standards for behaviour, respect for others and professionalism.

“This matter is being reviewed internally with no further comment at this time.”

Busch ended the season 11th in the championship standings, having dropped three places thanks to his Homestead retirement.

In other Sprint Cup news, David Ragan appears destined to join the ‘free-agents’ list for next season due to the impending closure of Roush Fenway’s #6 team.

In four full-seasons with Roush, Ragan has managed just one victory, and finished 23rd in the 2011 points standings.

Roush will continue to run its #16 (Greg Biffle), #17 (Matt Kenseth) and #99 (Carl Edwards) entries, although full sponsorship has yet to be found for Kenseth’s entry.

Ragan’s crew chief Drew Blickensderfer is expected to head to Richard Childress Racing where he will work with Jeff Burton.