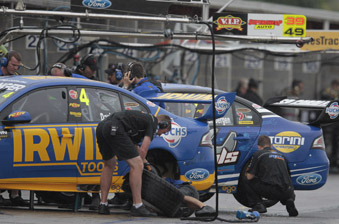 Stone Brothers Racing will decide in the coming days if it will conduct its final test day of 2011 at Morgan Park.

With Queensland Raceway currently unavailable for testing due to the resurfacing works being undertaken at the venue, SBR is highly likely to use the 2.967km Morgan Park circuit, which is located in Warwick, Queensland.

V8 Supercars recently contacted each of the Queensland teams, stating that any remaining test days this year could be completed at Eastern Creek or Morgan Park.

Under normal circumstances, all Queensland based squads are required to test at Queensland Raceway, while Winton is the official designated test venue for those based in Victoria.

“Eastern Creek is too expensive and you can never get a booking there anyway, so we’re just working out now if Morgan Park will be possible or not,” team owner Ross Stone told Speedcafe.com.

If the test goes ahead, it will be the first time a modern V8 Supercars team has conducted an official test day at a track that has never hosted a V8 Supercars event.

The 12-turn layout has seen some recent V8 Supercars action however, with Matt Stone Racing and V8 Supercars running the category’s Ford Falcon Car of the Future prototype at the circuit for test drivers Scott McLaughlin and Jack Perkins.

SBR looks set to join Ford Performance Racing, and potentially Kelly Racing, in running its cars post-season. FPR has confirmed that it will be at Winton on December 12, although it will do so without star driver Mark Winterbottom. CLICK HERE for Speedcafe.com’s previous story.

According to Stone, SBR has kept its last test day until after the season has concluded due to a lack of quality rubber.

“The reason we didn’t do a test before Bathurst was that we didn’t have a very good tyre bank,” Stone said.

“It would have compromised the running we did in these past races that we’ve just been to.”

After Friday, December 16, V8 Supercars will enforce a testing ban until the season-opening test day at Sandown on February 11 next year.