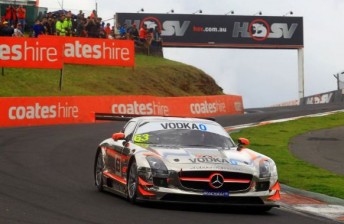 Hackett at the Bathurst GT round last month

The make-up of Mercedes-Benz’s involvement in the 2012 Armor All Bathurst 12 Hour is set to become clearer by the end of the month.

Fresh from finishing fourth in the 2011 Vodka O Australian GT Championship in his Erebus Racing SLS GT3, Peter Hackett will this week meet with Mercedes bosses and fellow customer team representatives in Germany about the Mount Panorama event.

Erebus Racing will campaign two of the German cars in next year’s Australian GT Championship, but according to Hackett, will not race either car at Bathurst due to the opening round of the series taking place in Adelaide just one week after the 12 Hour.

The situation sees Hackett trying to source a European car for the event, while also exploring opportunities to assist the potential involvement of international teams.

German endurance racing outfit Black Falcon has already sent an expression of interest to Bathurst race organisers about entering two cars, while Hackett told Speedcafe.com that there are more European Mercedes squads eyeing off the race.

“There’s a lot of conjecture about Mercedes Benz’s involvement in the 12 Hour,” Hackett told Speedcafe.com.

“As Erebus Racing, we absolutely have an interest in the race. We’re very keen to enter, and there are European teams that would like to enter, but it comes down to a commercial decision for them. 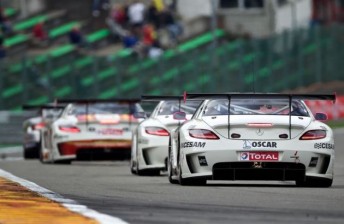 Black Falcon is one of several customer SLS teams in Europe

“I’ve been invited to attend the SLS Customer Sports Christmas party this week, and while we’re there we will be discussing the possible involvement of Black Falcon in the 12 Hour, as well as some of the other SLS GT3 teams like Heico Motorsport and Gravity Charouz Racing.

“We’ll be discussing how we can assist them at Bathurst, whether it’s by finding local drivers that can help them with their budgets, finding staff or motorhomes on the ground for them or whatever.”

Having sent engineers from its crack HWA outfit to this year’s Australian GT Championship round at Bathurst, Hackett is convinced that a factory assault would be taken very seriously by the marque.

“Mercedes-Benz does not do anything by halves. If they come, they will come to win, and more specifically to beat Audi,” said Hackett.

“But they’ve yet to decide if the Bathurst 12 Hour is important enough in global terms to invest as much money in as they’d need to in order to win.

“Each car needs to have 10 engineers and mechanics flown in per car, so if five cars come… you’ve got a massive investment.”

Regardless of the Bathurst situation, Hackett expects to compete in several VLN Series rounds at the Nurburgring next year with Mercedes.

“We’re in the process of sorting through which rounds we’ll do now,” said Hackett of the VLN.

“The series works on a seeded and unseeded driver format, so if you can come in as an unknown from Australia and do a decent job, then it can be very beneficial to their program.”

Ferrari and Lamborghini meanwhile will be well represented by private teams, with cars owned by Australian businessman-racers Peter Edwards, Ted Huglin and Roger Lago all appearing at Sprint Bathurst earlier this month. CLICK HERE for more.