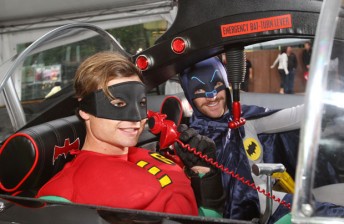 The V8 Supercars won’t be the only stars at the Sydney Telstra 500 with a group of iconic vehicles showcasing the Armor All Auto Show, a major part of this year’s off-track entertainment.

Amongst the headline acts, a technically perfect replica of the 1966 Batmobile, which was today flanked by Batman and Robin, the alter egos of Trading Post Racing’s Will Davison and Lucky 7 Racing’s Tim Slade.

Also on show was a Mad Max inspired car and a gold-plated BMW worth $1 million.

“Every kid is obsessed with superheroes so to get to sit in the 1966 Batmobile was like a childhood dream come true!” said Davison who was dressed in a 1966 Batman suit worth $3000.

Owned by Glen Jennings, the Batmobile is autographed by Adam West (Batman) and Lee Merriweather (Catwoman) and comes complete with a working rear flamethrower and Bat-phone.

“It’s massive. I wouldn’t want to be racing that beast around the Sydney Telstra 500 track next weekend. Although the flamethrower could come in handy!” said Davison.

Car displays have been part of the Sydney Telstra 500 over its first two years, but 2011 will see a greater focus and bigger number of special vehicles.

“We should be going for a world record, as this year’s Sydney Telstra 500 Armor All Auto Show is set to be at least Australia’s largest private car show with 1,000 exhibitors confirmed,” said Martin Whitaker, International Director, V8 Supercars.

“Race goers will get to see the most unusual and unique variety of cars ever assembled in one, massive exhibition. We want to ensure spectators are able to enjoy a range of experiences over and above the car racing and that is why we have included activities such as the Armor All Auto Show, evening concerts featuring some of Australia’s biggest rock legends as well as the Disney Pixar CARS Truck Tour Experience for families.”

The Sydney Telstra 500 kicks off next Friday December 2 at Sydney Olympic Park.