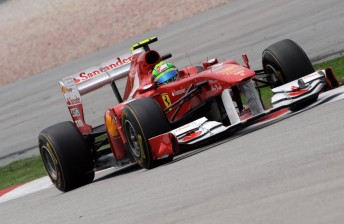 Felipe Massa aboard his Ferrari

Speedcafe.com’s guide to the Brazilian Grand Prix at Interlagos is now available.

Featured in this edition of the Race Guide are this weekend’s three local heroes – Felipe Massa, Rubens Barrichello and Bruno Senna.

The trio all head into the final race of the 2011 season under the pump.

While this weekend will mark multiple key milestones for Massa, the Ferrari driver is still looking for his first podium of the 2011 season, and has been put on notice by the team for his lack of performance.

With Barrichello and Senna both having uncertain futures beyond the end of the season, it’s a pivotal time for Brazilian involvement in Formula One.

The Brazilian Grand Prix Race Guide also features The Bagman’s team-by-team analysis, plus all the stats and facts ahead of the weekend’s race.