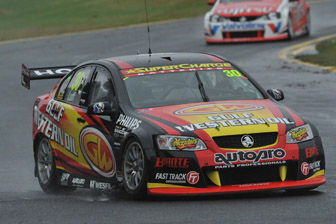 The news comes just a day after team driver Warren Luff announced he will quit the team at the end of the season.

CLICK HERE for Speedcafe.com’s story on a potential replacement for Luff.

After two years together, the decision to discontinue its association with LDM comes after a horror year of results, plus a desire to put more focus back into their lubricants business.

In a statement, Gulf Western Oils general manager Ben Vicary acknowledged it has been a difficult two seasons for the new team.

“We are designing and building a new facility with a 60 million litre per year manufacturing capacity and this needs to be our focus over the next 12 months,” said Vicary.

“Warren Luff is a genuine talent, a true professional both on and off the track, and it’s been a pleasure working with him in 2011 and the results do not reflect his abilities as a driver.”

The statement said that it is “highly likely” that Gulf Western Oils will remain in V8 Supercars in the future.

Vicary wished LDM team the best for the future.

“It’s a massive step into the V8 Supercars Championship and the level of professionalism is amongst the very best in the world,” he said.

“I wish Lucas and the team the best with all of their future endeavours,”

Team owner Dumbrell said that the split is amicable.

“I’ve appreciated their support during the first two years of my team,” Dumbrell told Speedcafe.com.

“We’ve definitely had a difficult year, but we’ve also had some highlights, like finishing 15th at Bathurst and qualifying seventh at Phillip Island.