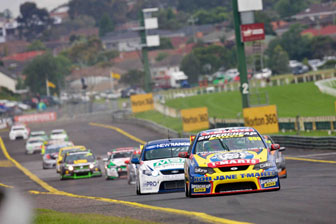 There are calls within the Development Series ranks to axe the long-standing reverse grid format in the Fujitsu V8 Supercars Series.

A first lap multi-car incident in the reverse top 10 race at Sandown on Sunday has sparked talk that V8 Supercars need to review the weekend format for the Development Series.

Perkins, who finished second overall at Sandown, was an innocent victim in the Sandown shunt where title contender David Russell skipped across the infield at Turn 3, spearing into the Wilson Security Racing Commodore of David Wall. Scott McLaughlin, Jack Perkins, Chaz Mostert and Nick Percat were also caught up in the collision.

Beyond ditching the reverse grid concept, Perkins also says that if V8 Supercars is serious about using the class as a ‘development’ series, it needs to scrap the three race ’round’ system and revert to a seven event, 14 race series – mirroring the V8 Supercars Championship. 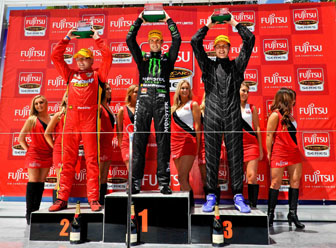 Jack Perkins, Andrew Thompson and Chaz Mostert celebrate on the Sandown podium. Perkins says that V8 Supercars should ditch the 'round' system and copy the Main Series format – have two races and two podiums each event

Perkins, among other Fujitsu Series drivers and teams, says that if change is not implemented, competitors will walk away.

“The reverse grid racing stuff was done and dusted in the Main Series in 2006, and the biggest reason was the damage to the cars,” Perkins told Speedcafe.com.

“They’ve persisted with it in the Fujitsu Series for way too long, and it highlighted itself on the weekend again. It does nothing but damage cars. It’s a joke.

“I can understand why they want to have a reverse grid race – there’s people in there who have no aspirations of being in the Main Series. That’s great, but Main Series teams are involved with four or five teams to breed young guys, and especially with the co-driver endurance rule, the series needs to step up to the next level of professionalism.

“I’m sure the Development Series will have strong fields next year, but the reverse grid races really turns people off. It’s just a car wrecker.”

V8 Supercars has used two different formats in the Fujitsu V8 Series over the past years – three race rounds with a reverse grid format, and two race rounds, generally used at the Clipsal 500, Bathurst and Homebush.

This year, the Perth round also saw two 30 minute races after originally being scheduled for a three race weekend.

Perkins says that V8 Supercars should change have the two longer races per weekend.

“V8s always talk about wanting to make the Fujitsu Series more like the Main Series, so they should nick off the round system and copy the Main Series. Have two races over the weekend, have a race on Saturday and Sunday, like at Adelaide, Bathurst and Homebush, and have a podium at the end of each race,” he said.

“That would make it much more like the current Main Series format where the races are longer. That prepares people for the Main Series, not a smash-fest.

“We don’t want to turn people away because of a gimmick format that can be easily fixed.”

The final round of the 2011 Fujitsu V8 Series will be run under the two race system at the Sydney Telstra 500.