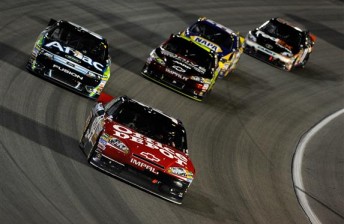 In a fascinating, rain-affected race, Stewart took a tense victory over Edwards in a classic end to the NASCAR season.

It is Stewart’s third NASCAR title.

The pair ended the title on equal points, with Stewart winning the series on a countback.

Stewart became the first owner driver to win the crown since Alan Kulwicki in 1992.

Stewart had to fight against the odds to take the win. He sustained damage from debris in the early stages of the race, and pit road issues also dropped him down the order.

The win ends the reigning of five-time champion Jimmie Johnson who has won the past five NASCAR Sprint Cup titles.

Australian Marcos Ambrose was classified 39th having only completed 72 laps of the race due to engine failure.

See below for the final points standings