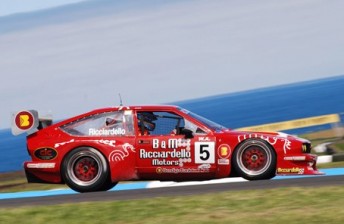 Kerrick Sports Sedan National Series organisers are hoping to revitalise the class next season with their own version of the V8 Supercars franchise system.

Running with the Shannons Nationals presented by Hi-Tec Oils, the spectacular tin-top class had just five of its 40 points scoring competitors complete the full five-round 2011 season.

Under the proposed scheme, teams will be contracted to turn up at all events, with financial incentives provided to those who commit to the program.

Category manager Phil Crompton is currently garnering support for the concept, and hopes to have the required number of deals locked in by the end of the 2011 calendar year.

“What we’re aiming for in 2012 is to contract a minimum of 14 teams to run all rounds of the Kerrick Sports Sedan Series,” Crompton told Speedcafe.com.

“We’re looking more at our own series as a consistent entertainment package, and we have the support of the Shannons Nationals in trying to achieve that.

“Our sponsors have also shown support, but we still have to put together the adequate number of teams to make it happen.

“I’ve already discussed the concept with a number of the existing teams, and they’ve indicated that they’ll support the 2012 format. But it’ll take a few more weeks to be able to sign off on it.”

Tony Ricciardello, who this season won his seventh Sports Sedan title, is one of the competitors supporting the proposal.

“At the start of the year we had a lot of people say they’d turn up to every meeting and then not follow through with it,” Ricciardello told Speedcafe.com.

“There’s no doubt that for our category we need to make the next step in being a bit more professional. If that means contracting teams to turn up, that’s probably the best way to go.

“It’s been a difficult year for people to make a living during the week and then go and have fun on the weekend, and we’re not professional race teams like the V8 Supercars, but we need to try different things.

“The state level guys probably haven’t supported us as well as they could have this year, which is why we’re going in another direction.”

In addition to the contracted competitor push, Crompton says the category must make it easier for new competitors to enter.

Crompton is currently completing the build of a new Trans-Am-styled Ford Mustang, and along with fellow Sports Sedan stalwart John Gourlay, hopes to be in a position ot be able to build multiple cars next year.

“We’re both moving to CAD and  laser cutting technology to reduce the time it takes to build a car,” said Crompton.

“One of the problems with Sports Sedans is that they’re all one offs, so it takes a long time to produce one and if something breaks there’s no one that can help you with it.

“To some people that’s a unique attraction, but it’s a major hurdle for a lot of potential competitors who’d prefer to go and drive a Porsche or whatever.

“We’d like to have two or three cars presented that if people put the money up they can buy.”

Crompton’s Mustang is one of several new cars expected to appear in the Kerrick Sports Sedan Series next year, with long-time competitor Charlie Senese currently in the process of importing two Trans-Am Corvettes from the United States, and Kerry Bailey’s much discussed Aston Martin still yet to make its debut.

The category will introduce a Trans-Am Cup for the American cars next year, and is also currently negotiating a deal to secure a control 18-inch tyre supplier for the 2011 season.