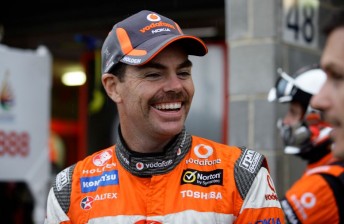 Craig Lowndes says he’s looking forward to making his return to the Armor All Bathurst 12 Hour next February, following confirmation that he will once again drive an Audi R8 LMS in the race.

Two of Audi’s three victorious internationals will again drive the second factory-assisted car, with Christopher Mies and Darryl O’Young set to be joined by German Christer Jöns – an ADAC GT Masters regular with the Ingolstadt marque.

As previously announced, the factory Audi assault will be run by Phoenix Racing next year, after Team Joest oversaw the 2011 campaign.

“I’m really looking forward to going back to the 12 Hour,” Lowndes told Speedcafe.com.

“The Audi R8 LMS is a sensational car to drive, especially across the top of the Mountain, and it’s great to be teaming up with Warren and Mark once again. “The race looks like it’s building momentum. Last year it was all about the two Audis and the (Tony Quinn) Porsche, but next year it looks like being even more competitive.”

One potential contender to the Audis next year will be Maranello Motorsport’s Ferrari 458, which recently set a 2:04.96s lap of Mount Panorama with Dane Allan Simonsen at the wheel – a feat that Lowndes describes as impressive.

“Allan has got good experience around there, but it’s obviously a very fast car and an impressive lap time,” said Lowndes.

“The 12 hour weekend isn’t about going as fast as you can over one lap, but I’m sure the Audis will be a little bit faster than last year so we’ll see what we can do in qualifying.

“There will be a lot of quick cars so I’m really looking forward to trying to go one better than last year.”

Lowndes also admitted that there’ll be more riding on his performance next February than just a 12 Hour win, as he continues to aim for a berth in the famed Nurburgring 24 Hour.

The three-time V8 Supercars Champion entered a VLN Series race at the Nurburgring with Team Joest earlier this year, but failed to start due to a practice crash, and will need another VLN opportunity before he can even qualifying for the endurance event.

“We haven’t locked anything in, but obviously we’d love to go back and do another VLN race,” said Lowndes of his international 2012 plans.

“The opportunity this year came up because of our performance in the (Bathurst) 12 Hour, so we need to make sure we go there and do a good job again.

“The (Nurburgring) 24 Hour is still the goal, and obviously what happened last time wasn’t good enough to qualify, so we’d love to have another opportunity.”