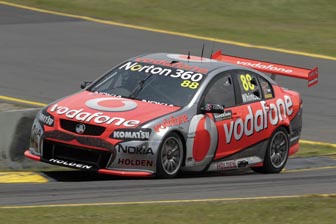 Jamie Whincup has edged closer to a third V8 Supercars Championship title by taking Race 26 at the Norton 360 Sandown Challenge.

Despite struggling to match Whincup’s outright lap speed, Winterbottom was kept in contention by a pair of Safety Cars and some slick Ford Performance Racing pit-work.

The battle for the lead reached its high-point during the first pitstops, when Whincup and Winterbottom made minor contact as the TeamVodafone driver returned to the fast lane.

Winterbottom struggled with understeer in the second stint, but benefited from a Safety Car for debris on Lap 24. The Orrcon Falcon then lost in excess of 7.0s prior to stopping for the second and final time on Lap 39.

A combination of a three-lap longer second stint, and the interference of traffic, saw Whincup just 1.6s in-front when the Safety Car was again called for debris on Lap 50.

As Whincup edged slowly away in the final 15 lap sprint to the flag, Davison, Lowndes and Tander pressured the #5 Falcon, with Davison failing to find a way by despite having slightly fresher tyres – the knock-on effect of a longer first stint.

Van Gisbergen had been on an even bolder strategy – switching to a three-stop schedule by pitting for a second time under the first Safety Car.

The SP Tools Falcon driver had dropped time late in his opening stint with an off at Turn 1, and lacked the outright pace of the TeamVodafone and Ford Performance Racing entries.

Also stopping three times was Steve Owen, who carved through from 27th on the grid to finish 10th – passing six cars in the final stint alone having benefited from the Lap 50 Safety Car.

Owen’s team-mate Russell Ingall had a less productive afternoon, finishing 23rd after a drive-through penalty for a collision with Alex Davison and Steven Johnson at Turn 6 that took the #17 car out of the race.

Andrew Jones was also in the wars, suffering steering damage after late-race contact with Greg Murphy at Turn 12.

Murphy had earlier spun while attempting to take 12th from Michael Caruso at Turn 2 – an incident that subsequently saw Tony D’Alberto make contact with the back of the Pepsi Max Crew Commodore as it rejoined.

James Moffat completed another tough weekend for Jim Beam Racing in 24th, having served a drive-through for triggering an incident that saw Caruso off the road for a second time.

Races 27 and 28 of the championship will take place at the Sydney Telstra 500 in two weeks time.