Whincup not relaxing despite healthy lead

Whincup not relaxing despite healthy lead 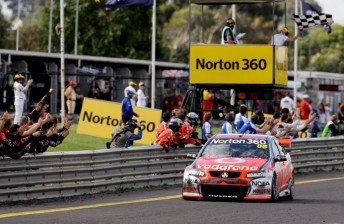 Jamie Whincup says he can’t afford to relax heading into the Sydney Telstra 500 in two weeks time, despite extending his points lead with a win today at the Norton 360 Sandown Challenge.

Having established a 188 point lead over team-mate Craig Lowndes, Whincup needs only to finish fourth – even if Lowndes wins – during the opening race in Sydney to seal his third crown.

Following his dominant Race 26 performance, Whincup pointed to his struggle to 13th place in the wet yesterday as a reminder that anything can still happen.

“We shouldn’t get too far ahead of ourselves – it’s not over yet,” said Whincup of the championship situation.

“It’s such a long year and there’s still another fortnight to go.

“I was reasonably relaxed yesterday before the race and it just goes to show how things can change.

“Yesterday’s race was one of the worst experiences of my life to be honest with the aquaplaning and the spray that was going on.

“It was quite a bad experience, and it highlighted to me that there’s still quite a long way to go and you should never take anything for granted.

“We need to keep our focus right until the end.”

Today’s race win was the 52nd of Whincup’s career, and the 50th alongside race engineer Mark Dutton.

The #88 car proved to have the edge on fellow front-row starter Mark Winterbottom throughout the 200km journey, with Whincup able to ease home on slightly fresher tyres in the final stint.

“The car was obviously fantastic today – the soft tyres are a good thing when the temperatures are a little bit cooler, which it was today,” said Whincup.

“There was a big behind the scenes battle with us and Frosty (Winterbottom) in terms of tuning the cars up during the stops. We’ve only got a few tools with tyre pressures and roll-centres.

“The guys did a phenomenal job. I was pleading with them to give me a couple more laps (than Winterbottom) in that (second last) stint and they were able to do that. I had better tyres at the end and a good car.

“(I feel that) both of the last two weeks were very pivotal in the championship. For Tassie and Sandown, we prepare the cars, go away and we were strong at both places.

“I think this race won the championship last year for James Courtney. It was an important race.”