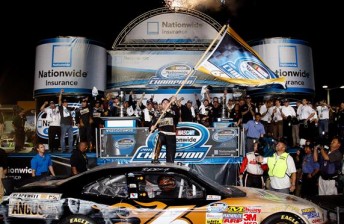 Ricky Stenhouse Jr has secured the NASCAR Nationwide title after finishing second in the season finale at Homestead Miami.

The Roush Fenway Racing driver tried a late race move on outgoing Nationwide Series champ Brad Keselowski, but came up short. Regardless, the result was enough to take the title.

Keselowski wasn’t allowed to defend his title under a new NASCAR rule that prevents a driver from competing for a championship in more than one series.

Stenhouse only needed to finish 37th in the race, and when six cars had retired from the race on Lap 28 of 200, Stenhouse was guaranteed the title.

Eventhough the title was secured, he tried in vain to pass Keselowski with a brave attempt on the last lap.

“That was all I had,” Stenhouse Jr said of his final lap attempt.

“I was really hoping for one more lap there, but Brad did a good job. I got a little loose there coming off (Turn) 4, or I thought we could have got him. But the Mustang did its job at Ford championship weekend.

“This is a dream come true.”

Third-place finisher Carl Edwards, who will fight for his maiden NASCAR Sprint Cup crown tomorrow, clinched the owners’ championship for Roush Fenway, leading the most laps and finishing two positions ahead of Denny Hamlin’s #18 Toyota, which entered the race with a one-point lead.