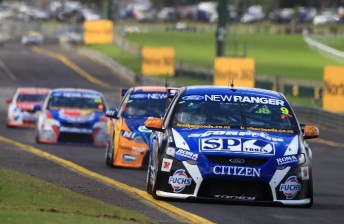 Van Gisbergen leads Will Davison during the opening stint

Shane van Gisbergen remains firmly in the battle for third position in the V8 Supercars Championship after recovering from a difficult opening stint in today’s Race 26 at Sandown.

The SP Tools Falcon eventually finished in sixth position, having been one of only two cars to switch to a three-stop strategy in the 200km race.

Running fourth in the opening stages, van Gisbergen could not match the speed of his nearest rivals, and emerged from the first round of stops back in eighth place – his cause not helped by an off at Turn 1 following his stop.

According to team manager Dave Stuart, moving to a three-stop strategy by pitting under the first Safety Car on Lap 24 turned out to be the right call, despite dropping the Kiwi temporarily to 27th on the road.

“We weren’t happy with the car in the first stint – Shane had a lot of understeer which was hurting his lap speed,” Stuart told Speedcafe.com after the race.

“We just thought that we’d lose too much ground to everybody else (if we stayed out any longer on the first stint). We took the opportunity come in, take on another set of tyres, make some adjustment to the car, top up the fuel and we made the car a lot better.

“We lost a lot of track position (by making the second stop), but Shane did a great job coming through the field, and we got up to 13th, and we just had to wait for Jamie (Whincup) to stop, otherwise, we’d risk going down a lap.

“We knew though that our last stop would be somewhere between 2-4 seconds faster, which would give us back some track position.

“The speed we had in the last two stints, we probably could have raced in the top three or four, whereas at the start of the race, we wouldn’t have been able to hold that position.

“We probably came out a bit in front of where we would have been if we didn’t take the third stop.”

VIP Petfoods Racing’s Steve Owen was the only other entry to try the three stop strategy, eventually finishing 10th after starting 27th.

Van Gisbergen sits 35 points behind third-placed Mark Winterbottom heading into the Sydney Telstra 500 in two weeks time, with Garth Tander a further 26 points down in fifth.