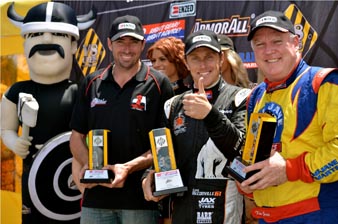 Johnson, McConville and Jane on the podium

Cameron McConville claimed his first round win at Round 7 of the Auto One V8 Ute Racing Series – protected by Armor All at Sandown.

McConville scored the round triumph with is first win the class yesterday, sixth place in Race 2’s reverse grid race, plus another race win to top the weekend off.

“Our Bundaberg Holden has been getting better at every round. We came third at Townsville and second on the Gold Coast. The main objective this weekend was to come away with a win.

“It was also nice to focus on one job for the weekend, perhaps that tells me something for next year. Big thanks to Paul, Dave and Rod for their efforts on the car all year.”

The former Saloon Cars driver claimed a win on debut in Race 2 – an excellent result in the competitive class.

“I felt pretty good at the end of it. To come to my first round and pull out a win on my first meeting is pretty exciting,” he said.

“I would like to come back, but it just comes down to sponsorship from now on but it would be great to come back and race again, I’ve really enjoyed my time in the Ute.”

Walton finished second in the last race, capping off a great weekend.

Walton’s combined results were not enough to stand on the outright podium, though. Grant Johnson and Kim Jane were fast and consistent across the three races.

“I’m feeling pretty good, my aim for the weekend was to maintain my points lead that we had and we’ve more than doubled it, so I’m pretty happy,” Pither said.

“With one more round to go, anything can happen but a bit of the pressure is off and we’ll keep driving to take the championship.”

The V8 Utes will head to the Sydney Telstra 500 for the final round of the 2011 Auto One V8 Ute Racing Series – protected by Armor All, December 2-4.