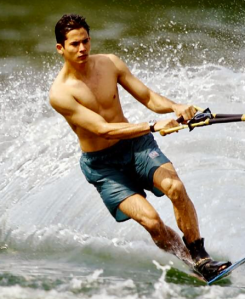 Yoong, who drove with Minardi in F1 and WPS Racing in V8 Supercars, was making his comeback to waterskiing after a 14 year layoff.

Yoong took the overall win in the men’s waterski title, while his sister Philippa made it a great day for the Yoong family, taking the women’s overall gold medal.

Yoong, 35, added the gold to the two silver medals his scored on Thursday.

“Malaysia were struggling early on (in the medal count) and I am glad to have chipped in. I’m happier this time compared to when I was competing back in 1997,” he told Malaysian paper The Star.

“The training in motorsports helped me a lot. I used to be temperamental and get angry fast when results didn’t go my way. I’ve never jumped 40 metres in practice but today I just went for it.

“It also helped that I stayed injury-free coming here.”

Yoong’s best result in Formula One was at the Australian Grand Prix in 2002 where he finished seventh – two places behind Mark Webber, who took his famous fifth place on debut.