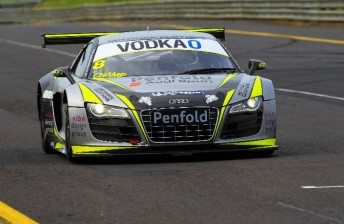 Mark Eddy on his way to the AGTC crown

Mark Eddy has won his second Australian GT Championship crown in four years after a careful drive in the final race of the 2011 season at Sandown.

Having spun on the warm-up lap for Saturday’s race, Eddy cruised to sixth place today in order to ensure the title.

“What a great way to end what has been a tough year for the category,” said Crick of a year that saw the championship endure a change of ownership, as well as some significant rule changes.

“This result has given the team plenty of motivation heading into next year, and with a great calendar, new cars, and some new drivers, I reckon the GT Championship is going to go off in 2012.”

“After spinning on the out lap yesterday, I just needed to take a step back, take a deep breath and bring my Audi R8 home in one piece,” said Eddy of his cautious drive.

“This has by far been my best year in racing after finishing second at the Bathurst 12 Hour with Audi and now to bring them a championship is just awesome, and I can’t thank my team Melbourne Performance Centre, and my sponsor Penfold Audi Sport enough for their dedication.”

Dean Koutsoumidis won the Challenge Class for the final round – taking both races on debut in the Vodka O backed category, while Peter Boylan was awarded the class honours for the season.

The 2012 Vodka O Australian GT Championship will kick off at the Clipsal 500 Adelaide next March.