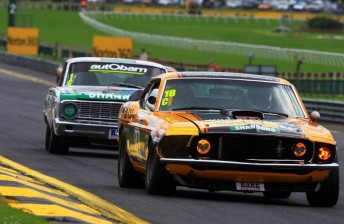 John Bowe and Jim Richards will fight out the 2011 Touring Car Masters crown at the Sydney Telstra 500 after taking the top two positions in the penultimate round at Sandown.

Bowe added a Race 3 win and a second place in the reverse top 10 grid Race 2 to his Saturday success to win the round by 22 points from Richards.

The result leaves Richards, who took a first and a second from Races 2 and 3 respectively in his Falcon Sprint, 50 points down on the Mustang driver with 180 points still available.

Andrew Miedecke’s title hopes received a major blow in Sandown’s final race, with the Chevrolet Camaro driver making a poor start from the front-row before finishing 18th and a lap down after an unforced error saw a trip to the gravel trap.

Bowe says he will try to avoid thinking about the points situations during the build-up to the final round.

“Andrew (Miedecke) half gives me the race at times as he doesn’t make the great starts. I’ve been there too and it’s a terrible feeling, but it works for me as my car works well on cold tyres,” said Bowe.

“I’m trying not to think too much about the title as everyone else is so focused on it, but I like to keep in the here and now mindset of what we need to do.

“As a thanks to all those who support and help me I’d love to think we can take it out this time around, but we always go out there and do the best we can, that’s all you can do and it seems to be working so far.”