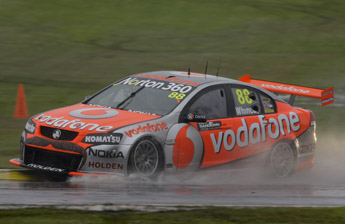 Jamie Whincup says that tyre grip cost him a chance at a top result at Sandown today.

The TeamVodafone star fell from his front row starting slot to finish the first leg of the Norton 360 Sandown Challenge in 13th place.

While Whincup battled with tyre issues, his team-mate and closest title rival Craig Lowndes finished sixth, narrowing the series points gap to 158 with just three races of the Championship remaining.

The drive from Lowndes was notable, given that he started the race from 27th. Coincidently, Lowndes had similar complaints about lack of wet tyre grip in qualifying.

Whincup, who lost six places in the last three laps, blamed his sets of tyres for the lack of pace in the race.

“Tough day for the #88 car – no tyres in torrential conditions,” Whincup said.

“We managed to keep it on the island though and score some reasonable points.

“I’m very happy to have a straight car, my well being, and we’ll fight on again tomorrow.”