Rod Nash re-signs with FPR and The Bottle-O

Rod Nash re-signs with FPR and The Bottle-O 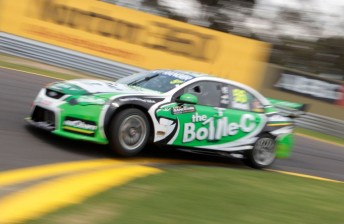 Paul Dumbrell aboard the #55 Falcon

Rod Nash Racing will continue to field a Ford Performance Racing prepared entry in the V8 Supercars Championship until at least 2015, the team has announced today.

In a press conference held at the Sandown circuit, Nash also confirmed that the #55 Falcon will enjoy support from liquour retailer chain The Bottle-O for a further three seasons – beyond its current deal which was set to conclude at the end of 2012.

The new deal will see Nash’s relationship with The Bottle-O stretch beyond 10 consecutive years.

“It is almost unprecedented to have a company the size of ALM (Australian Liquor Marketing – The Bottle-O’s parent company) extend a sponsorship agreement for such a long period when there is still more than a year left on its existing deal,” Nash said.

Nash was pleased to continue to align his entry with the factory Ford team.

“As a result of the Bottle-O sponsorship, our deal with FPR has followed a similar line, so it is fair to say that we have aligned that (with the sponsorship),” he said.

“Our relationship (with FPR) will renew and go through for another three years.”

While not speaking on specific numbers, Nash indicated that renewed sponsorship with The Bottle-O is a significant financial contribution.

“The level of funding for the one car is what I’d call in the upper end of a major team,” Nash said.

“Roland (Dane) would be happy with it!”

Nash was also quizzed on who will drive the #55 The Bottle-O Racing car next year, replacing the retiring Paul Dumbrell. While he gave away little more than what he has said in the past, he indicated that current Kelly Racing driver David Reynolds is still high on his wish list.

“No one is driving the car next year at the moment,” he said.

“There are a number of drivers out there, one in particular, but he is tied up. Then there’s the next level out there.”