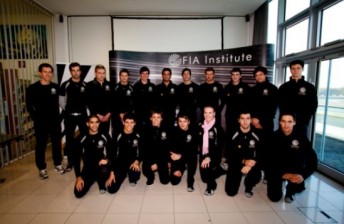 The final 18 drivers were selected from a field of 30, and will enjoy a series of FIA hosted workshops next year designed to prepare them for competition in the highest levels of the sport.

Reeves has spent 2011 driving in the WRC Academy, and is currently working on a deal to return next season.

“We had the ‘race of champions’ and I reached the top four, so that was a real plus.

“The whole week has been a real buzz and I put 100 percent into every task, so I am thrilled to have been chosen for the FIA Academy.”

According to Wurz, the four-day program was a comprehensive test for the young hopefuls.

“Over the course of the four days we have been looking at every area of driving skill,” explained Wurz.

“We have broken this down into its composite parts, such as steering input, braking input, throttle input, and into combining all of this behind the wheel.

“Overall, these guys have demonstrated a lot of talent. They are also all very coachable and they have a good understanding of what we are after. I’m really looking forward to a good cooperation with the new Academy drivers.”

Le Brocq, who finished second in the 2011 Australian Formula Ford Championship, will test Jamun Racing new ‘ecoBoost’ Formula Ford in England later this month, having competed in the final rounds of this year’s championship, as well as the famed British Formula Ford Festival.

See below for a video about the FIA Academy