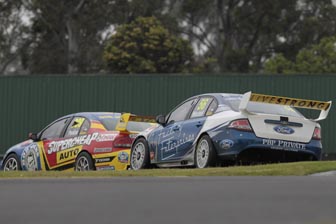 Jack Perkins has fended off a determined Chaz Mostert to win the opening Fujitsu V8 Supercars race of the weekend at the Norton 360 Sandown Challenge.

The Supercheap Auto backed driver blasted into the lead from second on the grid, and was never headed over the 15 lap journey.

Pole-sitter Mostert dropped to fourth thanks to a bad getaway, but was back into second place by the completion of the opening lap thanks to Andrew Thompson and David Russell running wide into Turn 9.

Nick Percat took third on the final lap from David Russell, who suffered with a loose rear-wheel in the closing stages.

Scott McLaughlin defeated Thompson in a battle for fifth, with the Monster Energy Commodore having run as low as eighth after its early off.

The Safety Car was called on the opening lap for an incident involving Marcus Zukanovic, Taz Douglas and Paul Morris.

The crash saw Zukanovic clip Douglas after being knocked sideways in front of the pack. Douglas suffered race-ending right-rear damage in the incident, having also collected Morris as he rotated his way towards Turn 1.

Daniel Jilesen failed to start Race 1 following his crash in qualifying this morning.

Race 2 for the Fujitsu V8 Supercars will take place at 1330 local time tomorrow.