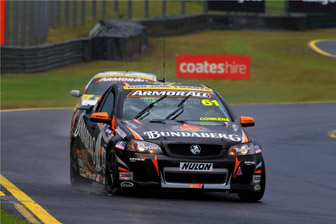 McConville qualified second behind pole-sitter David Sieders, but McConville’s Bundaberg Racing Holden was quick off the line and gained an early lead, which he held onto for the whole race. He eventually took the win by four seconds.

“It’s nice to crack a win. It’s been too long,” McConville said.

“The car has been quick in the wet and I’m just wrapped to take home a win for the Bundaberg team who’ve spent a lot of hours prepping the Ute.”

Ryan Hansford was unlucky not to finish the race after a throttle issue on the second last lap of the race when he was in eighth.

Hansford will start on the back-row tomorrow when the V8 Utes kick off the day at Sandown Raceway at 905 followed by Race 3 at 1205.