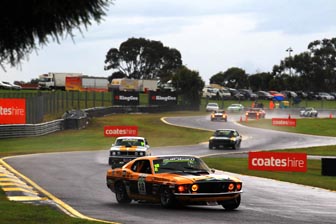 Ford Mustang driver John Bowe has won the opening race of Round 7 of the Autobarn Touring Car Masters Series at Sandown.

After qualifying on second behind the Lubrimaxx-supported Camaro of Andrew Miedecke, Bowe extended his championship lead with the result.

In the mixed conditions race, Bowe was pleased with the result.

“We had a 50/50 shot on the tyres so decided to go for slicks while many stayed on the wets which was at the time the sensible thing to do, but we took the risk,” he said.

“I got a good start and was on dry side of the track so that may have been a bit of luck.

“The car was good for the conditions. We had a half and half setup but even with the slippery surface I could manage it around the place, but again it’s how it falls isn’t it.

“We came here with a tall diff ratio with the aim to do well when we could do well, no gambles, so with the rev penalties, there’s no major need to change the diff and really, you can’t do better than a win at a place you love racing at.”

Two more races of the Autobarn Touring Car will be held at Sandown tomorrow.