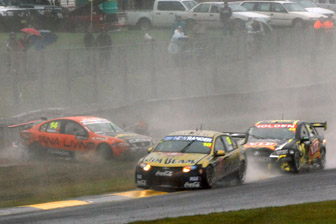 Jason Bargwanna spins out as James Moffat sails on through

Jason Bargwanna and James Moffat have launched into a war of words after their late race incident in Race 25 of the V8 Supercars Championship at the Norton 360 Sandown Challenge today.

The rear of Bargwanna’s Commodore was heavily damaged in the incident when his car hit the tyre wall.

The pair were dicing over 12th position with less than 10 laps of the race remaining.

After the race, Bargwanna criticised Moffat for his dangerous on-track tactics.

“Moffat hit me right at the corner’s apex on the top of the hill. I just don’t know what he was doing. I mean, who thinks they can overtake up there in these conditions?” Bargwanna said.

“There’s just no excuse for it. The guy’s a complete moron and needs to be sent home. The damage he’s done to our car is ridiculous and he needs to be penalised massively.

Moffat fought back at Bargwanna’s claims, suggesting that in wet conditions, Bargwanna should have offered more room.

“We don’t race to different rules in the wet. I wasn’t side by side, but I was far enough there to have the right to the corner,” Moffat told Speedcafe.com.

“You don’t need to be Einstein to figure out that if you make contact in these conditions, you are going to be facing the wrong way.

“Bargs just came across me, I couldn’t go anywhere and he has effectively turned himself in the wall.

“For him to carry on that, that’s just showing how unprofessional he is.”

CLICK HERE for Speedcafe.com’s race report and result for Race 25 of the V8 Supercars Championship.