SPY PICS: Mark Winterbottom aboard the Ford Falcon Car of the Future at Winton

Winterbottom and Jack Daniel’s Racing’s Rick Kelly debuted the new wheel and tyre package on the Car of the Future prototypes at Phillip Island earlier this month, before undertaking further testing at Winton this week.

As seen in Speedcafe.com’s exclusive spy pics, the bigger wheels and lower profile tyres will give the Car of the Future race cars a point of significant visual difference over their current counterparts.

“They’re a better tyre – they’re nicer to drive and more fun to drive on,” Winterbottom told Speedcafe.com of the 18-inch rubber. 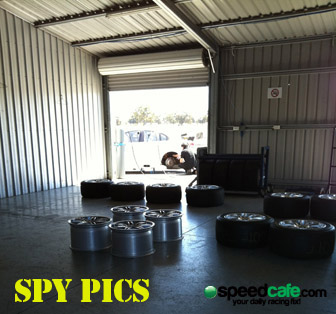 “Apparently the new constructions are not that much different to what we have now, but it’s really noticeable in the car. When you squeeze them a bit harder you get more out of them, which doesn’t happen with the current tyre.

“At the moment you’ve got to work hard to give the car front-grip, but with the new tyre the car has front-grip on its own without needing to force it to turn. So I think you’ll be able to tune the car still, but it’ll be easier to set-up. That will probably bridge the gap between the teams.”

With two COTF tests and two race meetings packed into less than two weeks, Winterbottom says that it’ll take him a few laps in today’s practice for the Norton 360 Sandown Challenge to re-acclimatise to his 2011-specification Orrcon Steel FPR Falcon.

“The first outing is always difficult when you switch cars,” said Winterbottom.

“In the COTF you sit in a different spot, the steering is lighter, the pedal box is different… just all the little things add up.

“When you do 140 laps of testing in one car and then jump into another and blaze out the gate for a qualifying run it just doesn’t feel comfortable straight away, you need a couple of outings to get back into the car again. “The fact they’re close but not the same makes it hard. I’ve driven a Porsche and then jumped in this and it’s an easy transition, because you just forget what you were doing in the other car and get back into it. But these two are quite close, so it messes with your head a little bit.”

The Winton test marks the last time that the COTF prototypes will be tested this year. Both the Ford Falcon and Holden Commodore are currently having Dunlop liveries applied for their official launch at the Sydney Telstra 500 (December 2-4).

Final tyre testing, as well as the brake and aerodynamic programs, is scheduled to recommence in February.