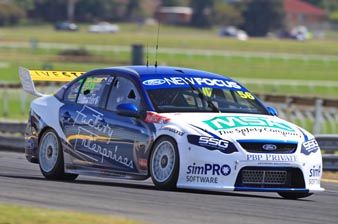 Andrew Thompson has set the benchmark in practice for the penultimate round of the Fujitsu V8 Supercars Series at Sandown – supporting the Norton 360 Sandown Challenge.

Thompson, the dominant driver in this year’s development series, was third fastest in Practice 1 before topping the times on a green set of tyres in Practice 2.

The series leader said that while today was good, conditions tomorrow will mean he will need to keep on his toes.

“We had a program today and we stuck to it,” Thompson told Speedcafe.com.

“We pretty pleased with how the day went. We were fastest in the second session and third in the first one. That’s pretty good, but we’ll have to see if what we learned today translates to tomorrow. Conditions here today were hot, and it is going to be different tomorrow.

Nick Percat was second fastest on the day, banking a fast lap on his first flying lap on green tyres before being held up at Turn 1 on his second flyer.

“Yeah this has been a pretty promising start to the weekend,” Mostert said.

“Today was all about learning the car and shaking it down – there’s a few new things to pick up with bars and buttons in different places so it’s an added bonus to be as fast as we were.”